Not even a “spot” of sludge in the pan or on the filter despite extreme heat & heavy towing. 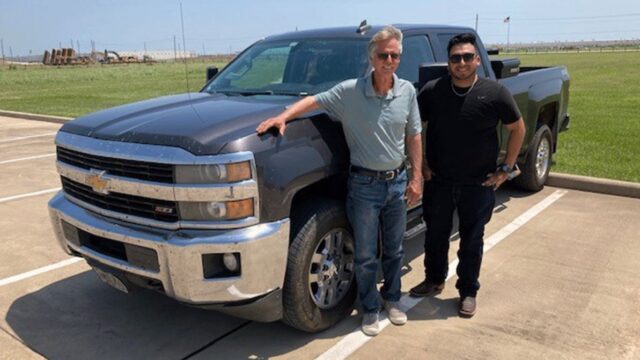 BTB Services owner Bryan Bayles and employee Oscar DeLeon stand by the company’s 2015 Chevy 2500, which is still running strong thanks to good maintenance and AMSOIL products.

Customer Bryan Bayles, out of Katy, Texas, saw a need while working as a groundwater sampler and turned it into a successful business. “We used to go to these sites that were really hard to get to because they weren’t being maintained,” he said.

“One site was 25 acres and in the middle of a town,” said Bayles. “People started complaining about rats running out of it.”

Much of the work involves using tractors, zero-turn mowers and handheld equipment to cut large areas of grass and brush.

“We take tractors out and weed eaters to get the paths clear so we can get out there,” Bayles said.

His vehicles include a small fleet of half-ton and larger pickups that transport equipment to sites using gooseneck trailers. Working in the scorching Texas heat means BTB Services’ trucks are exposed to temperatures that frequently exceed 100°F (38°C) for a good part of the season. Combined with towing up to 30,000 pounds (13,607 kg), the company’s vehicles are the epitome of “severe-service” work trucks.

One such truck is a 2015 Chevrolet 2500 that Bayles bought in 2015. Bayles does as much maintenance as he can himself, including changing transmission fluid and filters. When the truck had about 50,000 miles (80,000 km) on it, Bayles switched the transmission to AMSOIL Signature Series Synthetic Fuel-Efficient Automatic Transmission Fluid.

“I know that’s extreme, but we’re pulling about 30,000 pounds of weight behind the trucks,” he said. The maintenance strategy plus AMSOIL product performance have helped the truck eclipse 300,000 miles (483,000 km) with no issues.

“Spotless! I can’t believe it.”

So, after 257,000 miles (413,600 km) using AMSOIL synthetic transmission fluid, Bayles dropped the pan to change the internal filter, unsure what he would find. The cleanliness of the pan and fluid amazed him; there wasn’t even a hint of sludge or deposits. He texted his AMSOIL Dealer, Erroll Ivery, an image of the clean pan and pristine fluid with the words, “Spotless! I can’t believe it.” 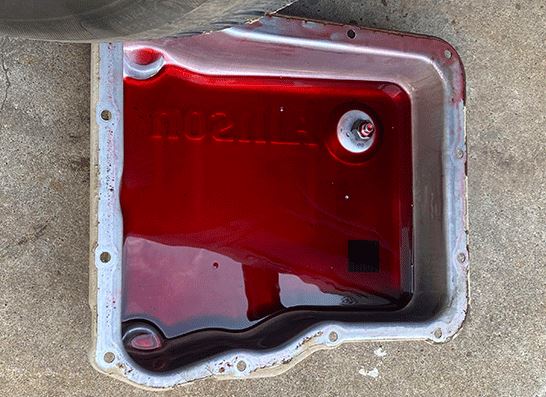 The transmission pan and filter contained no sludge or deposits; the fluid still appeared in like-new condition.

Bayles said there wasn’t even a film of deposits or sludge on the transmission filter.

BTB Services has four trucks, two diesel and two gas, all of which use AMSOIL products in the engine, transmission, differentials and cooling systems. All the company’s diesel tractors use AMSOIL products, too. “We started using AMSOIL in our zero-turn this year,” he said.

AMSOIL products help Brian Bayles keep his trucks and equipment up and running, making money, which is vital for any business. “It definitely has helped keep the equipment well-maintained. I have never had any problems with the vehicles I maintain,” he said.

Bayles isn’t shy about telling others about his AMSOIL success story. “It’s a product I definitely highly recommend,” he said. “I believe in putting the best in all my equipment.” AMSOIL DOT 3 & 4 Synthetic Brake Fluid is engineered for use in passenger cars and light trucks. It is a DOT 5.1 product, exceeding the specifications of DOT 3 and DOT 4. Additionally, its 5.1 formula provides excellent protection against water contamination. Rather than offer multiple products, we created one formula that performs best in all three applications.

New Brake & Parts Cleaner is a professional-strength product that quickly and effectively removes oil, grease, brake fluid and other contaminants from brake parts and other automotive components. It cleans brake parts with no major disassembly and leaves no residue, helping eliminate brake squeal and chatter.