Commercial-grade formulation in a 5W-30

Most small-engine oils we’ve tested are nothing more than re-labeled automotive oils, which are formulated with fuel economy in mind, not durability. That won’t cut it. Compared to liquid-cooled automotive engines, small engines run hotter; operate under constant load; generate more oil-damaging contaminants; suffer from neglected maintenance; and are exposed to dirt, rain, snow and other extremes. Simply put, they’re far tougher on oil that most people think.

AMSOIL Synthetic Small Engine Oil isn’t merely a rebadged automotive oil. Instead, we designed it from the ground up specifically for small-engine dependability. You can rest assured your engines are protected even during periods of extended use when there’s no time for scheduled maintenance. It’s built to solve the problems that plague small engines, including wear, power loss, oil consumption, stuck rings and valves and harmful carbon deposits. It helps landscapers, contractors and other professionals get more work done and save money.

AMSOIL 5W-30 Synthetic Small-Engine Oil is a long-life formulation that has repeatedly demonstrated its ability to safely exceed OEM drain intervals in the toughest conditions. Extensive severe-service testing proves its ability to provide service life of up to 200 hours/one year, whichever comes first. It provides an extra measure of protection when equipment goes longer between oil changes than is recommended by the OEM.

Available in the Omaha AMSOIL Store on 84th St. 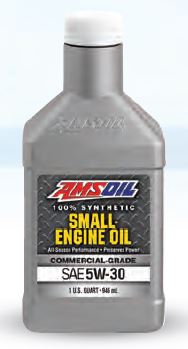 How to Store a Snowblower

Storing a snowblower properly is vital to ensuring it fires up when the snow eventually returns. When the first storm of the season dumps eight inches of snow on your driveway, you don’t want to be messing around in the garage when your snowblower won’t start.

Step-by-step: How to store a snowblower