In extreme cases, cylinder-liner cavitation in diesels can allow oil and coolant to mix. Then it’s just a matter of time until engine failure. Here’s what you can do to help ensure that doesn’t happen.

Most diesel engines are designed with replaceable cast-iron cylinder liners that are pressed into the engine block. While this doesn’t apply to turbodiesel pickups, it affects heavy-duty over-the-road trucks and other diesels. The piston moves up and down inside the liner, while a jacket of coolant surrounds the outside of the liner to cool the engine.

When the engine is running, the pistons move vertically inside their liners several thousand times per minute. Meanwhile, the rotary motion of the crankshaft applies a thrust force through the connecting rods to the piston. These contradictory movements cause the pistons to hammer the liners, causing significant vibration, similar to the effect of ringing a bell. This vibration can cause air bubbles to form in the coolant surrounding the liner.

When the bubbles rupture, they direct a high-pressure stream of coolant at the liner. Like a rushing river carving away a canyon wall, the coolant can erode the liner until cavities form. Left unchecked, these cavities can keeping growing and eventually penetrate the liner, allowing oil and coolant to mix. Once that happens, it’s only a matter of time before the engine fails. 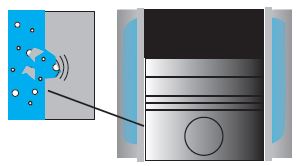 How Cylinder Liner Cavitation Occurs
Imploding bubbles direct high-pressure
coolant toward the cylinder liner, creating
cavities through which the coolant can enter
and mix with oil, damaging the engine.

For years, formulators have added metallic salts, like nitrites and molybdenates, to coolant that attach themselves to the liner and form a sacrificial layer. When the coolant bubbles implode, the metallic salts absorb the pressure and break off from the liner surface rather than the metal itself. Metallic salts naturally deplete over time, meaning motorists must replenish them periodically by adding a supplemental coolant additive (SCA) to the coolant reservoir, typically midway through the service interval. Unfortunately, this is often overlooked.

The trend in the coolant market – and the strategy we use at AMSOIL – is to eliminate adding an SCA by formulating coolant with organic acid technology (OAT). The chemistry of OAT coolants passivates the liner surface, which coats it in a thin, inert layer that provides protection against cavitation and corrosion. Unlike old-fashioned metallic salts, the additives in OAT coolants last much longer, meaning you don’t have to replenish the system with an SCA. Modern OAT coolants also help fight problems associated with old fashioned “green” coolants, like scaling and additive drop-out (which leads to “slime” in your coolant system) due to incompatibility issues.

Aside from using an OAT coolant, it’s good practice to check your coolant level periodically. Also, make sure to check the pH and glycol levels annually. Glycol is important to the level of freeze protection and the coolant’s boiling point. Over time, the water can evaporate from the system and increase glycol concentration, throwing off the coolant’s balance. Perform fluid analysis once a year for best performance. We offer that service through Oil Analyzers INC. (www.oaitesting.com). We also offer antifreeze test strips (G1165).

We keep this one in the Omaha store due to requests. If you need more than a case of four we can have it delivered next day or shipped to your home.